Lily James wore a Swarovski crystal-covered slipper in 'Cinderella' which was more expensive than her apartment in south London. 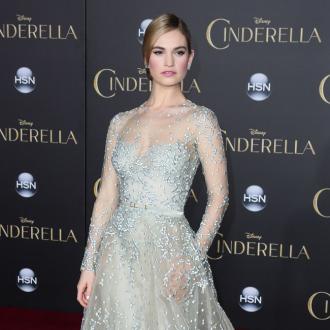 The 25-year-old actress has revealed the glass slipper from the film was made out of Swarovski crystals, leading her to believe the shoe was worth more than her apartment in south London.

She said: ''I do get to wear the most fantastic powder blue gown and glass slippers when Cinderella goes to the ball. They squeezed me into the dress and I wore a corset and I could hardly breathe. But it all helped to evoke the magic.

''The glass slipper is made out of Swarovski crystal and is probably worth more than my flat! I couldn't actually wear the real one, so in the shots where I'm dancing at the ball or running to my carriage, I wear a 'double' made of acrylic.''

The 'Downton Abbey' star also had thousands of the tiny gems stuck to her gown, body and hair and admits she still comes across the odd one in her house despite completing filming months ago.

She added to Radio Times magazine: ''The dress is also covered in 10,000 tiny Swarovski crystals that were also hand-stuck on my chest and in my hair. I still keep finding crystals at my home in Peckham.''