Oh Lindsay! We'd really appreciate it if Lindsay Lohan made her mind up. Is she a good-girl-gone-bad, a bad-girl-gone-good, or something else? Just when we thought she was back on the straight and narrow, the actress has been arrested for a hit-and-run! 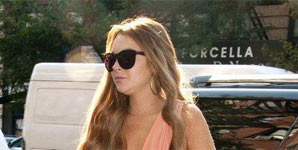 Hips Don't Lie? Fans of Shakira have been speculating on her 'possible' baby-bump for weeks, and the Columbian pop-star has finally confirmed that she and football star beau Gerard Pique are expecting their first child together! We here at Contactmusic.com send our heartiest congratulations!

Back For Good? Did we see this one coming? Well, yes. We did. It looks as though Robert Pattinson has forgiven Kristen Stewart for her affair with Rupert Sanders, taking his former girlfriend back after a dramatic reunion in Los Angeles. So what do we think guys? Is he making the right decision?

She's The Man: Amanda Bynes looks to be giving Charlie Sheen a run for his money! The actress and singer is displaying some disturbing behaviour as of late, apparently locking herself in a boutique changing room for hours! Little Angel: Congratulations to Take That star Robbie Williams and wife Ayda Field this week, the pair welcoming their first child together, a daughter named Theodora Rose - or is that Teddy?

The Vampire Babies? Anna Paquin and Stephen Moyer welcomed not one, but two babies this week! The 'True Blood' star gave birth to twins, and although born premature, the kids are said to be coming along just fine!

Classic Style: Forget Lady GaGa, Nicki Minaj and Rihanna, because it was Gywneth Paltrow who was named the World's Best Dressed Woman for 2012. Her simple, elegant outfits appear to have impressed fashion writers at People magazine.

Sorry Ladies: We reckon a couple of thousand George Clooney fans were secretly letting out a huge sigh of relief when it was reported that the actor had split from model girlfriend Stacy Keibler last week. So we imagine the same fans collectively hit their heads against the wall, repeatedly, after it was flat-out denied by Clooney's people.

The World's Greatest? R Kelly made history this week by becoming the most nominated artist in Soul Train Awards' history. He is up for this year's songwriter's award and album of the year, bringing his total haul to 21.

Video of the Week: This week's hottest footage comes from the Guggenheim Museum in New York, where Lady Gaga arrived to launch her new 'Fame' fragrance. The pop superstar arrived in usual style, on the back of classic car!