Lindsay Lohan: Black Swan Role Should Have Been Mine

Lindsay Lohan reportedly told a writer she should have had the lead role in 'Black Swan' because she had years of ballet training. 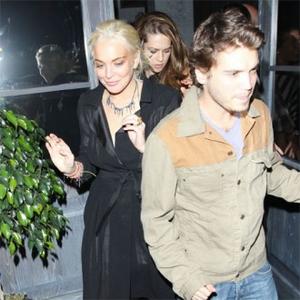 Lindsay Lohan claims she should have had the lead role in 'Black Swan'.

The 25-year-old actress has reportedly spoken of her frustration that Natalie Portman was handed the part of ballet dancer Nina Sayers who descends into Madness preparing for a production of Swan Lake - a role that earned her the Best Actress Oscar - insisting her own dance training made her ideal for the part.

Plum Miami magazine writer Jacquelynn Powers reports the actress told her she did "ballet until she was 19 and was indignant that she was not considered for the movie 'Black Swan'."

The troubled actress - who was recently freed from a 35-days house arrest, which she served in lieu of jail time after taking a necklace from an upmarket boutique store and violating the terms of probation set for her 2007 conviction for driving under The Influence (DUI) - had refused to give an interview to accompany a photo shoot she did for the publication, and the magazine instead accompanied the images with an account of her difficult behaviour.

As well as costing the magazine $100,000 after turning up late, sending the shoot into overtime, she also refused to vacate the hotel room which the publication was paying for.

Jacquelynn wrote: "Monday morning was supposed to be check-out time, but Lindsay and her posse refused to leave. It was like watching The Lights come on at a nightclub after-hours - not pretty."

They also reported she was argumentative, drank wine while speaking about being alcohol-free, and insisted on cleaning a stripper pole before she would pose with it.

A photographer on the shoot commented: "She has a dangerous element to her presence. You never know what's gonna happen in the next two seconds. Is she gonna bite you?"