Lindsay Lohan will not be allowed to leave the facility in New York. 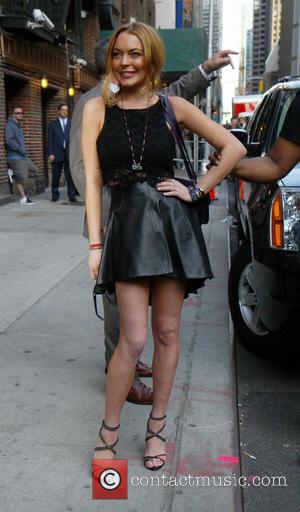 Lindsay Lohan has made arrangements to enter a rehabilitation facility in New York state in May, according to the Los Angeles Times. Lohan's legal team is understandably keen not to disclose the details of the facility, though it's likely that media outlets will be furiously scurrying around Gotham to find out where Lindsay will be holed up for the next three months.

The actress, 26, made an appearance on the David Letterman show on Tuesday (April 9, 2013) and although saying she hadn't spoken about rehab in the pre-interview, was peppered with questions about her three-month stint by the TV host. In fairness, she remained upbeat and made a few jokes. "I'm the happiest when I'm working, and the healthiest. And I think [rehab] is an opportunity for me to, you know, focus on what I love in life. And I don't think it's a bad thing," she said. "I think it's a blessing ... and not a curse," she explained. When asked if she had "addiction" problems, Lohan told Letterman he sounded like Dr Phil, much to the delight of the live studio audience.

During her sentencing for lying to police, Lohan was ordered to enter a facility in which she could leave for any reason. Though the facility will not be locked as such, Lohan would violate her probation if she left at any time. Officials will be monitoring her progress at all times, though her attorney Mark Heller said, "I'm very confident that you won't be seeing Lindsay Lohan in any criminal courts any time in the future."