Lindsay Lohan will feature on Duran Duran's new album 'Paper Gods', which is set to be released in September. 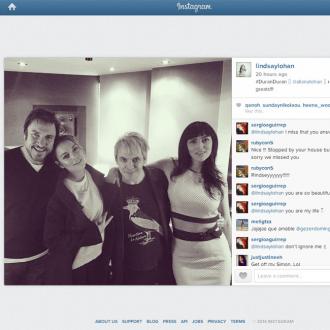 The 'Mean Girls' actress, who released her debut record 'Speak' in 2004, has recorded with the band for their 14th LP, 'Paper Gods', alongside other artists including Kiesza, Janelle Monae and Mr Hudson.

Rumours the 28-year-old star would feature on the album emerged in December when she posted a photo of herself with the band online, and it's now been announced their collaboration will feature on the record, which will be released worldwide on September 11 2015.

The band - featuring Simon Le Bon, NICK RHODES and John and Roger Taylor - last released 'All You Need Is Now' in 2010, and the group said they set out to beat it with this LP by letting themselves be influenced by their favourite records.

Lead singer Simon added: ''I judge what we release by my favourite albums - 'Horses', 'Harvest', 'Let It Bleed', 'Blue', 'Transformer', 'Aladdin Sane'. Those are classic albums. The only rule is it's got to be music you can live with for the rest of your life.''

He explained: ''It really goes back to that strange early Duran mix: the hard-edged pop, coexisting with this dark, weird, experimental side.''