Lindsay Lohan was spotted getting close to Kelly Brook's ex Thom Evans at the Global Gift Gala on Monday (17.11.14) after previously dating Danny Cipriani, another of the model's exes. 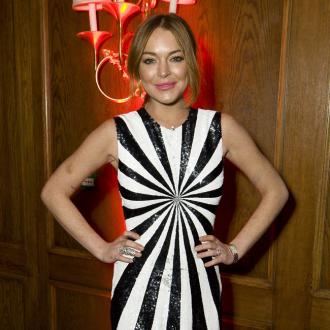 Lindsay Lohan was spotted getting close to Thom Evans at a star-studded event.

The 28-year-old actress was seen giving the former rugby player her number at the Global Gift Gala in London on Monday (17.11.14), but the 29-year-old hunk - who previously dated model Kelly Brook - is said to have rejected the flame-haired beauty's advances.

A source close to the former sportsman told The Sun newspaper: ''He was very polite but was trying to make it clear he wasn't interested.

''She slipped him her number. But later on she was seen on her own in the hotel bar with her coat on.''

It's not the first time the 'Mean Girls' actress has been romantically linked to one of Kelly's exes after she dated another rugby player, Danny Cipriani, in 2010.

Thom and Kelly suffered heartache when she miscarried their child in May 2011 while six months pregnant and they later split in February 2013.

Kelly revealed in her recent autobiography that she lost another baby in December 2011 which ultimately drove them apart.

Writing in her book, she explained: ''Because I was around the six month mark, everyone was torn between whether this should be seen as a miscarriage or a still birth. In my mind, it was a miscarriage.

''It was the most painful thing. I was bedridden for two days with enormous boobs, covered in cabbage leaves ... Thom and I spent a lot of time crying that week.

''Kelly also writes in her book: 'So Thom and I weren't careful and just before Christmas 2011, I got pregnant again,' adding: 'I had another miscarriage after a few weeks.''