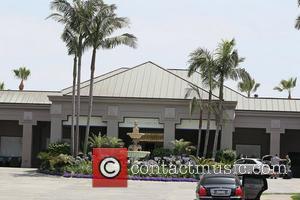 Picture: * REP: 'LINDSAY LOHAN IS FINE, JUST EXHAUSTED' LINDSAY LOHAN's representative has blamed a lack of sleep and dehydration for the actress' health scare on...

Lindsay Lohan has been impressing all and sundry on the set of 'The Canyons' with both porn star and co-lead James Deen and director Paul Schrader lauding the actress who seems to have turned a new leaf after finally completing her probation period earlier this year. Pictures have emerged from the set of the film, about "the dangers of sexual obsession and ambition", that demonstrate the openness all involved are showing during shooting.
Deen has been impressed by Lohan and said in a blog post "My favorite part of the day was sitting with Lindsay Lohan (who is amazing) and our director Paul Schrader (who is also amazing) and planning out how we would shoot our love scenes in the movie. Doing porn is easy," he continued. "(But) the sex scenes in the movie are obviously not particularly sexual scenes. They are plot driven story intensive scenes. The point of all this is that the three of us talked about how each shot was going to go and the choreography of each scene. We talked for a long time about it and even used props."
Director Schrader meanwhile commented that he'd initially approached model Monica Gambee to play the lead but she'd turned it down after finding out Deen was the co-star. " [Our producer] Braxton had approached her Lindsay Lohan's manager about the possibility of Lindsay playing a cameo, but when we met with her at the Chateau Marmont she said she'd like to play the lead," he commented. "Braxton and I were quite blunt, explaining we were paying for this ourselves and had no completion insurance and were uncomfortable with her track history. I told her that if she agreed to the micro budget salary did a screen test and completed Liz and DICk on schedule, we'd consider her."