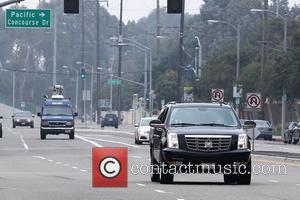 Picture: Lindsay Lohan being driven away in a black Cadillac Escalade after posting bail, less than an hour after a judge revoked the actress' probation for...

Lindsay Lohan is currently working off her community service at the Los Angeles Coroner's Office as she desperately tries to stay out of jail for violating her probation. However, it appears the 25 year-old actress and model would sooner be surrounded by the dead than anyone else.
Halloween saw Lohan and several celebrity pals including Paris Hilton and Christina Aguilera party at the Hollywood Forever Cemetery, dressing somewhat tenuously for the occasion by wearing a "slutty nurse" costume, reports Tmz.com. However, the Los Angeles Times reports that the troubled star - whose father Michael was arrested twice last week on a count of domestic battery abuse - spent the day of the 31st hard at work in the Coroner's Office as she bids to convince Superior Court Judge Stephanie Sautner that she's turned over a new leaf ahead of a hearing tomorrow (November 2nd 2011) where she'll be accused of violating her probation. It's thought that Lohan will fully admit this, having been kicked out of the Downtown Women's Shelter, where she was due to be completing 360 hours community, for repeatedly not showing up.
Lohan has had to work 16 hours a week at the morgue in order to convince Sautner that she's turned a corner, though things got off to a bad start when she turned up late for her first day - subsequently getting turned away.