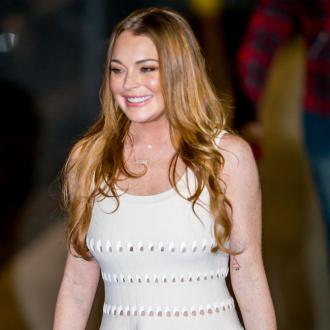 Lindsay Lohan pretended to be a security guard on 'Jimmy Kimmel Live!'

The 28-year-old star poked fun at her Esurance Super Bowl commercial - in which she played a reckless driver and ''sorta mom'' - by dressing up as Jimmy's sidekick Guillermo.

Lindsay wore a curly black wig and fake moustache and disguised her pretty pink dress by donning a shirt and tie and oversized blazer complete with 'Jimmy Kimmel Live! Security' emblazoned on the pocket.

Speaking to the camera at the start of the show, Jimmy said: ''But first, a message from our friends at Esurance ... You know, some companies base your insurance based on general categories such as your age and gender, not really based on you yourself. Isn't that right Guillermo?''

The camera then pans to the studio doors where Guillermo usually stands guard, and Lindsay is seen trying to keep a straight face while replying: ''Yes Jimmy''.

Following the 'Mean Girls' actress' second, ''Right Jimmy'', the 47-year-old comedian begins to get suspicious, asking: ''Is that you Guillermo? 'Cause you look about 200 pounds lighter than usual.''

Lindsay then replied, saying: ''Sorta. I've been going to pilates.''

Jimmy responded: ''Well, you look great ... Are you sure you're Guillermo because you look a little bit like Lindsay Lohan.''

However, the flame-haired beauty continued with the skit insisting she is Guillermo and, turning to Guillermo dressed in a blue dress, gold stilettos and long red wig, she claimed he is her.