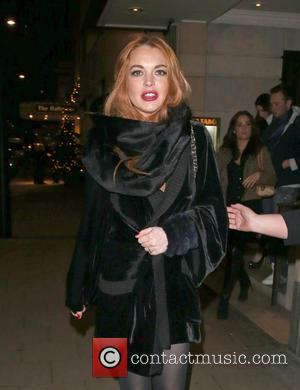 Just when we think she might be settling herself down with a new boyfriend (rumours abound about her and The Wanted's Max George), Lindsay Lohan rejects offer from Dancing With the Stars. With debts amounting to almost $300,000, the much loved show that receives enormous ratings offered her almost double that, but she turned it down.

As TMZ reported, Dancing With the Stars, keen to get on board one of the most talked about celebrities in the western world, and a source tells the website the the offers exceeded $550,000. Apparently she has never and will never consider doing reality television, which makes her one of the only washed up stars not to try to trawl back any kind of resemblance of a good reputation or career. She's adamant to stick to movies. She's developed a really bad rep when it comes to films, particularly in the NY Times article about The Canyons, as well as the trouble she caused on set in Scary Movie 5 opposite her generous colleague, Charlie Sheen.

In another stupid rejection, Lindsay refused a negotiative plea-bargain with her prosecutor over crashing her Porsche last year. She was offered a deal in which she wouldn't be sent to prison, just be made to serve 6 months in rehab. Apparently though she said no (Amy Winehouse, anyone?) and refuses to admit any responsibility for a crime she continues to claim she did not commit.