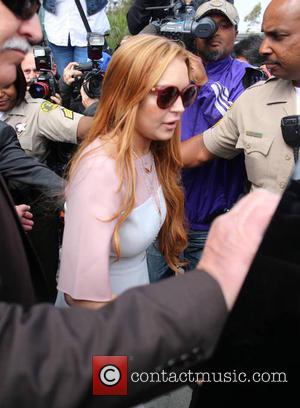 They might seem like an unlikely couple but the Lohan and Sheen scene in Scary Movie 5, which saw the two Hollywood stars in bed together has been reprised. Lindsay and Charlie clearly thought that filming one bed scene together just wasn’t enough for them and decided to do it again; this time for Charlie’s popular FX comedy Anger Management.

Lindsay is currently awaiting news on where she is supposed to serve her 3 month ‘rehab lockdown’ sentence, for lying to cops about a car crash. In the meantime, whilst her lawyer wrangles with court officials over whether or not the concept of a locked rehab facility is something that actually exists, in real life, Lohan had some free time on her hands and made an appearance in the comedy series. After Sheen suffered a series of very public dramas and embarrassments, it was Anger Management that managed to get his public image back on track. Perhaps he’s hoping an appearance on the show will do the same for young Lindsay?

According to E News, Lindsay Lohan plays herself, but in the show, she’s a patient of Sheen’s therapist, who falls in love with him. The storyline apparently draws on her troubles with the police and pokes fun at her fondness for partying. The episode is scheduled to air in April. Charlie Sheen: invited Lindsay on his show for another bed scene