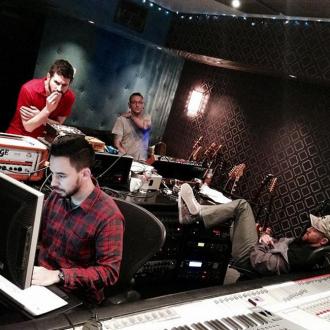 Frontman Mike Shinoda has teased details of new material for the record, the follow-up to their 2012 album 'Living Things', and said the band plan to go in a new direction.

In a blog post, Mike attached a photograph of the band in the studio and wrote: ''As most Linkin Park fans know, the sound of each album is usually quite different from the last.

''The new album is no exception. But as usual, the album's sound twists and turns as it is created, so any attempt at estimating what it sounds like today would be silly.

''The moment I tell you it sounds like 'X', the songs will automatically take a drastic turn and evolve into something different within a week.''

He added: ''But what I can tell you is I'm inspired. We're inspired.''

Meanwhile, the US metal band - which also features Chester Bennington, Rob Bourdon, Brad Delson, Dave Farrell and Joe Hahnhave - have been named as one of the headline acts for Download Festival 2014 and plan to perform their 2000 album 'Hybrid Theory' in its entirety at the popular event.

Festival organiser Andy Copping has confirmed they will play on Saturday, June 14, joining special guests Fall Out Boy. Friday night headliners are Avenged Sevenfold and Aerosmith will close the festival, held in Donington in Leicestershire, on the Sunday.