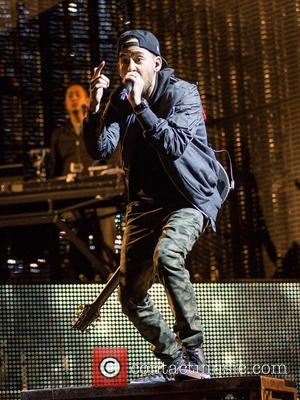 Linkin Park have been added to Hollywood's Rock Walk.

Singer Chester Bennington and his bandmates placed their hands in cement outside the Guitar Center on Sunset Boulevard in Los Angeles on Wednesday (18Jun14).

Benington told fans at the ceremony that he was looking forward to bringing his children back to his slice of Hollywood real estate, stating, "I definitely think it would be fun to bring my kids down and show them this kind of thing, because it's an interesting thing that not everybody gets to be a part of and it's fun for them to see me in a different way."

He added, "For me in particular this spot in L.A., this strip, really means a lot to me personally. It was the very first place I met these guys (bandmates), it was the place I sat outside of Zomba music publishing at eight o'clock in the morning, because I thought that's when businesses open."

The Grammy Award-winning group joins the likes of Jimmy Page, Eric Clapton, Alice Cooper, Black Sabbath, Aerosmith and Kiss among the acts who have been inducted into the Rock Walk.