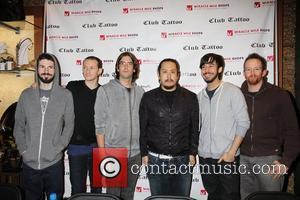 Linkin Park took to the stage in central Moscow on Thursday night (23Jun11) for a massive gig to mark the premiere of the new Transformers movie.
The rockers, who have contributed to the soundtrack of all three robot films, helped launch the latest blockbuster, Transformers: Dark of the Moon with a concert in Moscow's famous Red Square for more than 20,000 fans.
The band played on a Transformers-themed stage in front of a screen showing clips from the new movie, which premiered as part of the city's International Film Festival.
The stars of the movie, including Shia LaBeouf and Rosie Huntington-Whiteley, walked the green carpet for the screening, while director Michael Bay revealed his Russian ancestry was part of the reason why he agreed to hold the premiere in Moscow.
He told reporters, "I'm really proud we are doing a premiere here: I think it's a wonderful world stage... I grew up during the Cold War. My grandfather, who is from Russia, said I would never make it into the film business... That's partly why I'm here."