Soul Legend Lionel Richie's Second Marriage Fell Apart When He Broke A Promise To Himself And Went Back To Work In The Studio. 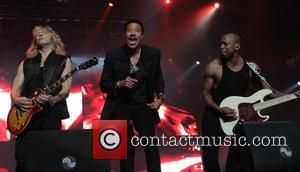 The Hello singer tells British newsman Piers Morgan his nine-year marriage to former mistress Diana Alexander fell apart in 2003 when he turned his back on a life of luxury and found himself recording new music.

Richie says, "I made a promise that I would not go back to work. One day I knew I was in trouble because I just happened to stumble back into the recording studio. Over."

In his candid chat with Morgan, which airs as part of U.K. show Piers Morgan's Life Stories on Friday (04Sep15), he also recalls shutting down a tour in Europe in 2005 to enter rehab with his troubled daughter Nicole after she was arrested for possession of heroin.

He adds, "That’s a fairly cataclysmic thing for any father to have to watch his beautiful, young daughter go through.