Little Mix member Jade Thirlwall has confessed Jesy Nelson and Jake Roche are worse than Perrie Edwards and Zayn Malik when it comes to public displays of affection. 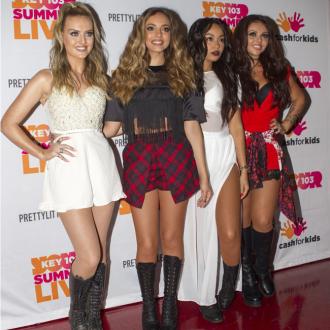 The 22-year-old singer has revealed Jesy and her Rixton frontman fiance Jake - whom she got engaged to on the weekend - are worse than her fellow bandmate Perrie Edwards and her fiance Zayn Malik when it comes to public displays of affection.

Asked which of the couples is more affectionate in public, Jade told Toby Tarrant on Capital FM: ''Jesy and Jake. It's in a nice way, not in an annoying way. You know when you see couples kissing all the time and it makes you feel sick, I literally watch and I admire them. Young love!''

Little Mix - which also includes Leigh-Anne Pinnock - previously confessed they all love Jake, and are even a little envious of their bandmate as he's such a great guy.

Jade said: ''I feel like such a creep because I just stare at him sometimes.''

Perrie added that she and the other Little Mixers refer to Jake like he's in the band when they're doing interviews.

The 21-year-old beauty said: ''We all talk about Jake like he's one of us. When we do interviews I'm like, 'Tell them about the time he did this or that.' ''