British Pop Stars Little Mix Have Urged Fans To Support Calls For A Ban On Animals In U.k. Circuses As Part Of A Campaign For People For The Ethical Treatment Of Animals (Peta). 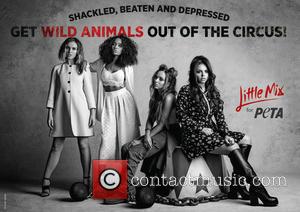 The DNA hitmakers have posed in chains for a new PETA advert which proclaims, "Shackled, Beaten and Depressed. Get Wild Animals Out of the Circus!"

Speaking on behalf of the girl group, Leigh-Anne Pinnock says, "We were shocked to learn that wild animals are still suffering in circuses. Animals don't jump through rings of fire for fun - they do so out of fear, and it's time to ban this so-called form of entertainment once and for all.

"There's no reason why animals should still be suffering in circuses, and we hope that by posing for this ad, we'll be doing our bit to help ban the use of wild animals in circuses. We hope, too, that our fans will join us in supporting PETA's campaign to end this cruelty."

The campaign aims to put pressure on the U.K. government to follow through on a long-standing promise from Prime Minister David Cameron to ban the use of performing animals in circuses.