Little Mix are enlisting the help of Jason Derulo and Macklemore to help them rise up the US charts with their third studio album. 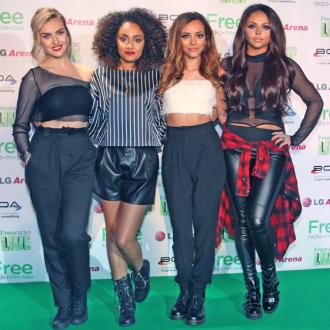 Little Mix are enlisting Jason Derulo and Macklemore to help establish themselves in America.

The 'Word Up!' singers recently celebrated the success of their second studio album 'Salute' in the US, but they are now hoping to top the record's success by working with more American artists and producers for their next effort.

Jade Thirlwall said: ''We want to write with more American producers and are hoping to work with Jason Derulo's people. 'Talk Dirty' is our favourite song so more stuff like that.

''And we would love to collaborate with Macklemore too.

''It's about making more hits, really. We start working on it as soon as we get back from America before our UK tour, so it will be a bit of a rush.''

Jade told the Daily Star newspaper: ''Mel C is lovely. We didn't even know she was going to be there and it was a total surprise.

''She said, 'Whenever you're free you need to come to my house for lunch.' '' Ariana Grande Takes To Twitter To Take Down Piers Morgan