Liv Tyler is thrilled her father Stephen Tyler has got engaged to Erin Brady. 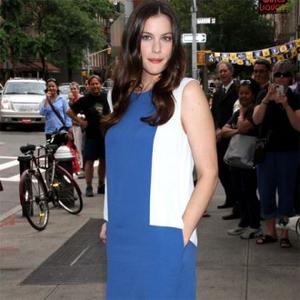 The actress is thrilled her rocker dad is going to marry Erin Brady - an executive for Clear Channel - and she can't wait for the wedding.

Speaking to People magazine at the Sundance Film Festival, she revealed Stephen and Erin have been together "for a long, long time" and added: "I like her very much."

Liv also revealed she is following in the Aerosmith rocker's musical footsteps.

The 34-year-old star - whose mother is model-and-singer Bebe Buell - has recorded a cover version of Inxs song 'I Need You Tonight' for a Givenchy commercial which she appears in.

Liv - who has a seven-year-old son Milo - said: "I got to record a cover of INXS's 'I Need You Tonight' for a Givenchy commercial. It was fun and terrifying and wonderful.

"I always thought when I was a little girl that I'd be a singer. My mom was always in bands. My dad. And my stepfather, Todd Rundgren, is an incredible musician."