I was searching for a word, something to give a little more meaning to London Grammar's music. On the one hand, it seems obvious to focus on their approach to song writing, a process during which they seem to have the conviction of devout minimalists. On the other, they make a platform for singer Hannah Reid with such assured subtlety that through her vocal projections you cannot  stop yourself from thinking of the likes of Florence Welch and Lana Del Rey, stars in the wilder mould who both thrive on sensory overload. As ever, I'm left reflecting that the answer is more complex than something a few letters can adequately summarise. 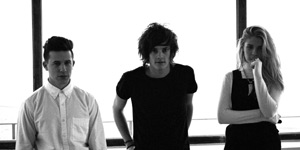 Whatever that quality is, it's working. In a little over 18 months, the trio have gone from speculatively posting songs on YouTube to signing with a major label on which their debut album 'If You Wait' narrowly missed topping the charts. All this isn't too shabby in an era where breaking through the minefield of desperate established artists frequently defeats the worthy and interesting, and tonight's gig has been sold out for months, underlining their arrival in the XX's neighbourhood.

In many ways, The Cockpit, with its 400-ish capacity and permanent dinginess (Sorry guys), is the perfect venue to see the band in, especially given that a follow up series of dates for early next year has already installed them in the pasteurised, sub-hanger next level up places. Why? Because if you've heard their music, you'll know it's rooted in the crepuscular twilight which exists at the three o' clock in all of us. Reid arrives on stage dressed like she's about to move flats, but the moment that her smoky lung bursts hit the room, the audience are appreciably spellbound. Beside her, cohorts Dan Rothman and Dot Major wisely let those soaring pipes be the centre of attention and, after about 20 seconds of opener 'Hey Now', the whole thing clicks together with the effortlessness of people recognising that their time is soon to come.

That plus the following 'Darling Are You Gonna Leave Me' and 'Interlude' pass fluidly but without intra-song comment, but, just as you were worried about stage fright, Reid opens up warmly - she's terribly posh - and Major reveals that his brother was a student at the city's university, eliciting cheers from a newer breed of the same. As you'd expect from a band with such broad appeal, they're just one cross section of a diverse audience; Asda mums rub shoulders with skinny jeaned pop kids and polo shirted muscle lads. All of them, though, are clearly in the palm of Reid's hand, especially during 'If You Wait''s signature moments; the impressive, neo-classic 'Strong'; and the elegant regret of 'Wasting My Young Years', whilst fewer songs about a decaying relationship have sounded better than Metal And Dust in recent years.

Each of these are a triumph of less-is-more, letting the listener's mind fill the dark spaces at their periphery with dreams; as uber-modern as they are though, the event horizon of Judie Tszuke's 'Stay With Me 'Til Dawn' is ever present, especially during the laconic 'Interlude'. It's also fitting that their encore - an immaculate versioning of Chris Isaak's perennial classic 'Wicked Game' - joins the dots between the performance of now and a past that suits them, one in which the singer and the song weren't simply talking heads. If a word is to come, you're almost tempted to use the word authentic, but that would be so 20th century. You also wonder what London Grammar would sound like in the light. Who knows? But, for now, they can still cling on to the shadows, before the halo at the end of the fame tunnel inevitably swallows them up.