Lorde has revealed she's been hanging out and ''making tunes'' with Disclosure ahead of the release of both her own and their second albums. 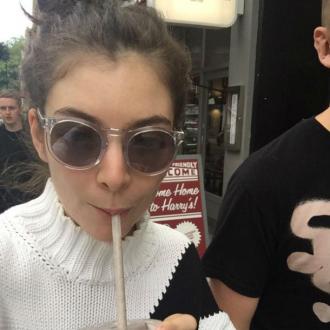 Lorde is ''making tunes'' with Disclosure.

The 18-year-old singer took to her Twitter account last night (10.06.15) to reveal she's been hanging out and working on new music with the 'Latch' hitmakers.

Alongside an image of her slurping on a milkshake while walking down the street with brothers Howard and Guy Lawrence, she wrote: ''making tunes and getting oreo milkshakes with @disclosure (sic).''

The brunette beauty previously collaborated with the electronic music duo at the BRIT Awards in 2014 where they performed a mash-up of her hit song 'Royal' and their dance single 'White Noise'.

However, this will be the first time Lorde has worked with Howard and Guy - who recently teamed up with jazz star Gregory Porter on their new track 'Holding On' - on original material.

The 'Yellow Flicker Beat' singer recently revealed she'd taken ''a few months off'' at the beginning of the year but is now ''getting into making the next body of work''.

Speaking about working on her second album she said that, ''[It's] very exciting and scary but so validating'', and added that she's ''taking my time to make the new [music] as good as I can.''

Lorde's producer and co-writer Joel Little - whom she worked with on her debut album 'Pure Heroine' - also revealed the star is ''trying new things'' for her next record.

Meanwhile, Disclosure have announced that their own second album 'Caracal' will be released on September 25 and is available to pre-order now.