Lorraine - I Feel It Video

Single 'I Feel It' : 10th April
UK Tour with The Feeling : Feb/March

Lorraine release their first single, 'I Feel It', for Waterfall Records/Columbia on April 10th. The band has confirmed two London shows; The Barfly on February 22nd and the 100 Club on March 15th. They will also tour with The Feeling and Mobile through February and March. Lorraine have been tipped by Radio One's Head of Music and XFM as "one of the hottest new bands to watch this year."

Lorraine are Ole Gunnar Gundersen (24, vocals), Anders Winsents (24, guitar) and Paal Myran Haaland (23, keyboards, programming). Their drummer is a little black box, which does exactly what it's told. The band began in earnest in the summer of 2000 after deciding not to return to school, choosing instead to rehearse full time in a decaying factory building 45 minutes outside of Bergen. Their unique and modern twist on influences such as Depeche Mode, The Cure, New Order, The Smiths and Pet Shop Boys has created a sound quite unlike anything else currently in circulation. "We're a bit 1985 and we're a bit 2020, we keep going back and we keep moving forward. We're like everything you have heard, and everything you have never heard." The result is an astonishing collection of songs that will become impossible to escape from in 2006.

Lorraine, I Feel It Lorraine, I Feel It Video 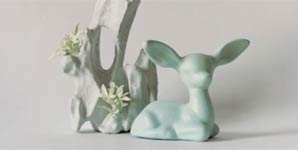 Lorraine - I Feel It