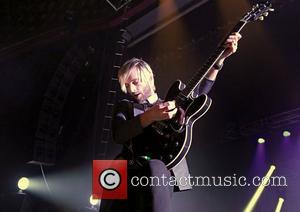 Last Train Home singer Watkins had previously denied all charges, including two accusations of attempting to rape a baby under the age of 12 months, but he changed his plea to guilty as his trial kicked off at Cardiff Crown Court in Wales on Tuesday (26Nov13), and the singer will now be sentenced on 18 December (13).

Two female co-defendants, aged 21 and 24, who cannot be named for legal reasons, also altered their pleas and admitted to a number of offences.

Further details of Watkins' crimes emerged in court on Tuesday, with prosecutors revealing that the singer had filmed his sordid encounters, with one 17-minute video showing him performing a sex act on an 11-month-old baby - the child of one of his fellow defendants. Investigators also discovered that he had set the password for his laptop to 'if**kkids'.

Shortly after the hearing, guitarist Gaze took to his Twitter.com blog to express his relief that the ordeal was nearing an end, writing, "That was over quick. Thank f**k (sic)".

He then addressed the group's fans, adding: "Thanks for the kind words. At least there is closure now."

Gaze and the remaining members of Lostprophets, Mike Lewis, Stuart Richardson, Jamie Oliver and Luke Johnson, announced last month (Oct13) that they were splitting after 15 years together in light of Watkins' personal scandal.