Actor Lou Diamond Phillips Feared Art Would Imitate Life On The Set Of His Drama The 33 Because He And His Co-stars Filmed In Real 500-Year-old Mines. 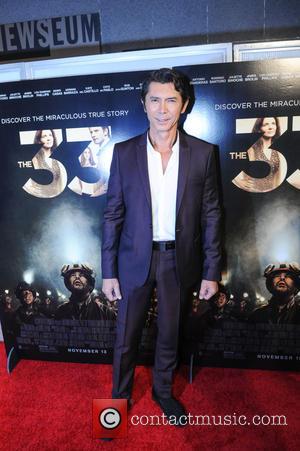 The Stand and Deliver star appears alongside Antonio Banderas in the real-life movie, which documents the dramatic rescue of 33 Chilean miners who were trapped underground for 69 days in 2010.

The cast and crew headed to Bogota, Colombia to film the majority of their underground scenes, and Phillips reveals the threat of becoming stuck underground was very real throughout production.

He says, "There was no glamour to this whatsoever. We shot in two real mines just outside of Bogota, Colombia. Salt mines, going into them six days a week, 12, 14 hours a day, the absolute real deal.

"Both mines were over 500 years old and I thought, 'Oh my God, what an ironic headline that would be (if they collapsed)!' But it's the truth, I mean, we were down there the entire time (with) hard hats, except for the scenes where we were not wearing them, with mine safety people there, and they would literally clear us out of the way of falling rock every once in a while. They were constantly checking the ceiling. That paranoia, that sense of peril was always there.

Luckily, Phillips didn't suffer claustrophobia during the shoot, but he did feel a little queasy as they shot some footage on location right by the original scene of the disaster, the San Jose Mine.

He continues, "The interesting thing is we also shot in the Atacama Desert, a mile away from where it actually happened. Maybe I'm projecting, but I felt perfectly fine in Bogota (but when) we got to Chile, and it was like, 'Oh, this happened a mile away'... so going into the mine, we only filmed the entrances, (but) there was still a great surreal feeling."

However, there was one aspect of the whole shoot which really boosted Phillips' spirits - working alongside Banderas.