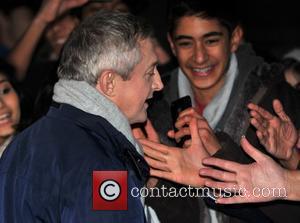 Louis Walsh 's demeanour has always suggested that he's game for most things, the cheeky Irishman often sporting a broad grin on the 'X Factor UK' even when coming under fire as a judge on the show - something that's happened all too regularly this year with frequent spats between him and fellow panellist Gary Barlow. However, it was still a surprise to see the 59 year-old step out dressed in woman's clothes - not only that, Walsh was in fact mimicking an outfit and hairstyle of former 'X Factor UK' sparring partner Cheryl Cole!
Walsh was wearing high heels, tights and a red dress, accessorising with a leopard print hand bag and silver S-shaped earrings has he was surrounded by security; the 'X Factor UK' stalwart also had his hair up in a beehive in a look that was an exact replica of one of Cheryl Cole's earlier this year. Those thinking that Walsh has embraced a new life of cross dressing however can think again, the star was merely dressing up for entertainment magazine Heat's series of end-of-year photoshoots which saw he and other celebrities dress up as other stars for the publication.
Speaking to the magazine Walsh enthused, " I texted Cheryl months ago to say I was going to dress up as her, and she said, 'Do it,'" adding "I think she'll howl with laughter when she sees it. Simon Cowell will love it, too, because I think he secretly likes drag queens!" The issue also sees Alan Carr dress up as Jodie Marsh and Britney Spears among others.