Operating in a genre in which hype and proclamations of self-genius are very much par for the course, the background to 'Lupe Fiasco's LASERS' (Love Always Shines Everytime: Remember to Smile) is interesting, perhaps moreso than the album itself. Recorded and ready for release in 2009 the album was only put together after Lupe, or Wasalu Muhammad Jaco to his friends, was prevented from releasing a final defining triple album, tentatively titled 'LupE.N.D', due to his contract with Atlantic. 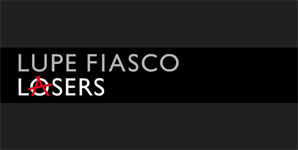 It was only after tireless campaigning and petitions sent to his label by Lupe and fans that Atlantic chose to release the end product, an album that Lupe himself has said he "both loves and hates". So it isn't too unreasonable to expect the worst from an album that was disregarded for having a lack of 'hits' and then forgotten about by its publishing label. Yet it doesn't sound drastically inferior to the majority of mainstream hip-hop, despite the production progeria of the genre meaning that with the 18-24 month period between production and distribution of the album it already sounds slightly dated. 'Words I Never Said' and 'The Show Goes On', the Modest Mouse sampling hit that Lupe has stated was "the label's record" and not his own, are sufficiently bombastic and are delivered in a way that masks the forced earnestness of Lupe's lyrics.

'Beautiful Lasers (2 Ways)' and 'Coming Up', a coupling featuring young rapper MDMA, are the highlights of the album and probably the tracks that are closest to what Lupe would sound like outside of Atlantic's clutches. The former funnels upteen layers of ambience, synths and distorted guitars into a very much 'of its time' widescreen hip-hop schematic, whilst the later bounces on a jazzy piano roll that Lupe and MDMA dance around. Both are brimming with ideas and confidence, and both take chances that the rest of the album seems afraid to take.

Later on 'All Black Everything' contains an interesting contrast between dreamy string samples and raps about slavery built on a refreshingly simple old-school drum beat, but again it feels that this isn't Lupe's record. It feels that even long before the struggles of getting the album to be put out he

had begun to switch to autopilot and allow others to take control of his work, and the majority of 'LASERS' feels like an act of appeasement, a perfectly acceptable offering that Lupe needs to get out of the way before he can escape his label and create something that is truly of his own hand.