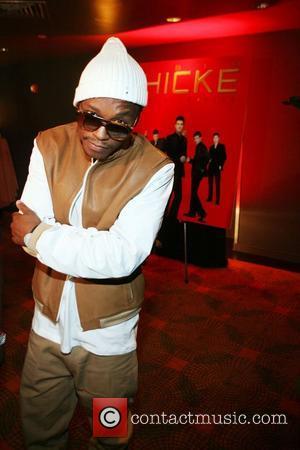 Rapper Lupe Fiasco has spoken out about his involvement with new rock band JAPANESE CARTOON, insisting he is only an admirer of their work - not a collaborator.
The Superstar MC was rumoured to have teamed up with the post-punk group to provide vocals for two new tracks posted on their MySpace.com page, under the alias Percival Fats.
Japanese Cartoon were forced to deny the claims Fiasco was turning his back on hip-hop to join the group, after fans became convinced he could be heard singing on their new material.
In a post on their online blog, the group wrote, "Percival Fats (born Percival Hindenburg-Fats) is NOT Lupe Fiasco (born Wasalu Muhammad Jaco). Although he is a dear friend.
"Lupe does finance the band but is not, I repeat, not, the singer in Japanese Cartoon. He is, however, the producer and we value his participation very much."
And now Fiasco himself has shed light on the situation - revealing he has other plans in mind for the group.
Writing on an internet forum, he says, "I like those kids a lot. Met the bass player overseas last year and their publicist/manager is a good friend from like, childhood. May sign them. Not me singing though."
Fiasco last year (08) announced plans to retire from rap music after the forthcoming release of his third LP, LupE.N.D.