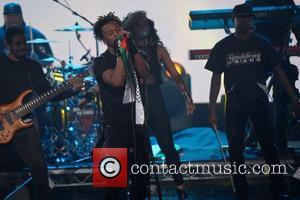 Rapper Lupe Fiasco has hit out at authorities at Los Angeles International Airport after he was handcuffed and questioned about his carry-on luggage on Thursday (17Nov11).
The Superstar hitmaker, real name Wasalu Muhammad Jaco, was preparing to catch a flight to Rhode Island when he was stopped by security guards and quizzed over a piece of technical equipment he was reportedly banned from taking onboard the plane, according to AllHipHop.com.
Fiasco, 29, took to his Twitter.com blog to tell fans all about his airport run-in, although he failed to provide specific details about the incident.
In a series of posts, the 29-year-old star wrote, "Wow…Fresh outta handcuffs @ Lax... Airport PD (police department) officer was just doing way too much."
The hip-hop star was not charged over the incident and he refused to let the unexpected delay spoil his day as he made his way to his concert in Kingston, Rhode Island, where he arrived in time for his performance.