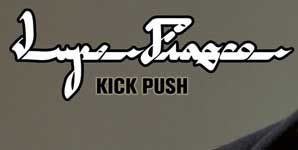 Hailing from Chicago, Illinois, Lupe Fiasco is poised to be the next superstar of Hip-Hop and releases his debut single, 'Kick, Push' on June 19th. He shone brightly on Kanye West's 'Touch The Sky' single with his creative use of metaphors and comes to the musical arena armed with his single dedicated to the art of skateboarding, taken from his forthcoming album - Food & Liquor.

"I used to skateboard when I was younger. I was really into it. I neverreally knew that skateboarding was so deep as a culture. It's just as deep as Hip-Hop. I'm not the greatest skateboarder, but I'm a damn good rapper, so I made a damn good skateboarding song", says Lupe. Produced by Soundtrakk who provides a heavy bass-line meshed with a jazzy sound bed for Lupe to guide the listener's senses throughout the song. Making it easier to visualize the story with lyrics like "labeled a misfit, abandoned, 'kakun kakun kakun,' his neighbors couldn't stand it."

With the release of his Atlantic Records debut, 'Food & Liquor'," Lupe Fiasco is set to take the entire music industry by storm. The album due out later this year, sees Jay-Z as one of its executive producers. Other beat-makers include: Prolific, Soundtrakk, The Buchanan's, Needles, and Bryce Wilson. Guest artists include: Jill Scott, Kanye West and Mike Shinoda (Linkin Park).

Raised on Chicago's West Side as the youngest boy of nine brothers, Lupe (born Wasalu Muhammad Jaco) is an eclectic soul with varied interests. "My father was a real prolific African drummer and can play anything
from the Djiembe's to the bagpipes. My mom is a gourmet chef that has traveled the world. We were always around different cultures. It is because of these artistic experiences [that] there are no limitations to what I talk about on my record."

"The title (of my album) reflects on me being Muslim and being from the streets," says Lupe. "In Chicago, instead having bodegas like in New York, the majority of the corner stores are called 'Food and Liquors.'
The store is where everything is at, whether it be the wine-o hanging by the store, or us as kids going back and forth to the store to buy something. The 'Food' is the good part and the 'Liquors' is the bad part. I try to balance out both parts of me."

The continued success of hip-hop depends on individuals who combine the streets with intelligence with strong radio airplay. And with Lupe Fiasco, rap has found another favorite son. "[When I retire], I want to step away on positive note." says Lupe. "What you put out into the world comes back to you. You actually change the world with what you do. I want to put some good in the world."