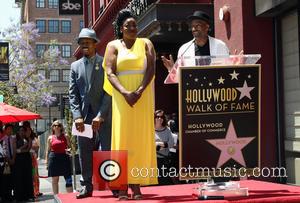 Luther Vandross, the award winning soul singer who passed away in 2005, is being remembered this week after American Idol contestant JACOB LUSK performed the singer's hit song 'Dance with the Father' on Wednesday's show (20th April 2011), reports USA Today. Lusk's own father passed away when he was young, and he used the performance as a fitting tribute.
Lusk has been compared to Luther Vandross since the beginning of this year's contest, and he finally tackled the soul singer's biggest song on this week's live show. His rendition of 'Dance With My Father' wowed the judges, with Steven Tyler noting, "You remind me all the time of the reason I love music. Your daddy was up there listening to you". Jennifer Lopez was equally complimentary, remarking, "It's hard to perform when a song means that much to you. You want to bare your soul, but at the same time you have to have enough control to find the notes". Responding to the Vandross comparisons, Lusk admitted it was "scary" and reminded the audience that it was the late singer's 60th birthday.
Luther Vandross, who died of a heart attack in July 2005, sold over twenty-five million albums worldwide. He won eight Grammy Awards including the gong for 'Best Male R&B Vocal Performance' four times. The track 'Dance with My Father' scooped the GRAMMY AWARD for 'Song of the Year' just one year before his death.

Luther Vandross Tribute Musical In Works, 10 Years After His Death