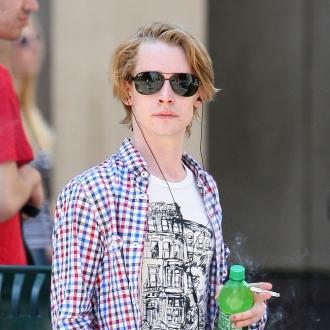 The 'Home Alone' actor is dating Jordan Lane Price - who bears a striking resemblance to his ex-girlfriend Mila Kunis - and friends say she has been a fantastic positive influence on the former child star.

A source said: ''For the first time in years Macaulay looks happy and healthy. Jordan has rescued him from his drug hell, and its ironic that she's a double for Mila, who dumped him because of his drug use.''

Macaulay has never been confirmed as a drug user, but has long been plagued by rumours of using heroin and painkiller oxycodone, but Jordan - who starred in a now cancelled remake of 'All My Children' - is being firm with him and says she'll walk out if she catches him using.

The source added to the National Enquirer: ''While Jordan likes to drink, she's not a drug user, and she shows Macaulay that he doesn't need drugs to be happy. She's also made it clear that if he starts using again, she's walking away.

''Macaulay seems so smitten that he quit drugs, gone cold turkey and Jordan's helped him move on from Mila.''

Macaulay started dated Mila in 2002 after the breakdown of his marriage to Rachel Miner. They split in 2010, and Mila is now rumoured to be marrying Ashton Kutcher.