Eden, North Carolina-born Travis Stewart - or Machinedrum as he is otherwise known (among many other a pseudonym) - has undergone something of a cultural upheaval in recent years, one matched by his move to the Ninja Tunes label. This change has been marked by his move to the Kreuzberg district of Berlin; a melting pot of cultural diversity, a proud devotion to its musical past and a hub of emerging talent in many genres with the many clubs and night venues in the area having their say on the proficiency of the local DJs and electronica producers who so regularly impose their own musical values on the area. On 'Vapor City', you can here this mish-mash of ideas that must greet Stewart every day; an amalgamation that sounds surprisingly good on tape. 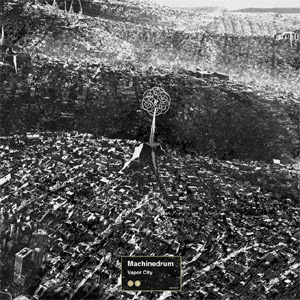 "Ok, someone's been listening to Burial", was admittedly the first thing that came to mind when listening to album opener 'Gunshotta.' Admittedly, I am not a well-versed Machinedrum listener and 'Vapor City' is the first album I've ever heard by him, so the album was something of an experience to say the least. When the effervescent, urbanite dub is transformed into a Goddamn jungle track, my eyes (and ears) were immediately opened as it became clear that Stewart doesn't like to sit still. What unfolds from the pulsating opener is a mixing bowl of electronic sub-genres smashed to pieces and then re-assembled all over again like some kind of musical kintsugi.

'Center Your Love' is a lulling number where the tenderly strummed guitar chords, synth tickles and off-kilter vocals reel in the tightly processed claps and sprint-paced beat, fashioning a mellifluent piece of music. Stewart can cut back and forth between being almost waiflike and flying off the hinges with a stomping rave number, such as 'Gunshotta', with ease and does so throughout 'Vapor City'. He even does it on single songs, like the steady building 'Infinite Us.' As the luscious piano slowly morphs into a cyclical synth-line, then again transforms into an even grimier synth, so too does the beat morph from a steady flow to a frenzied drum & bass standard. All this before slowing down to that quiet plain once more as the song reaches its seventh and final minute.

There is no set template for Stewart to work from here; each step the album takes is as unassuming and potentially unexpected as the last and the album only flourishes through this eclecticism. It allows certain tracks, 'Don't 1 2 Lose U', to sound almost melancholic, but at the same time it sounds as though they would be happily received on most dancefloors. It also gives permission for songs like bombastic 'Gunshotta', the energetic, elated 'SeeSea' and the hauntingly dark interlude 'Vizion' to not seem remotely out of place. If anything, they sound right at home.

Consider it pomposity if you will, but the elements of classic IDM, jungle, drum and bass, deep house and even hip hop and darker techno all melted together have produced an accomplished and encompassing album. 'Vapor City' makes all the more sense when you consider it the way Stewart seems to want you to with his title: as a cityscape of sound, an airborne Kreuzberg. You should probably visit it some time.