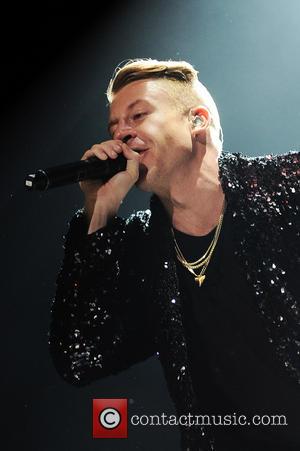 Picture: Macklemore and Ryan Lewis - Rapper Macklemore of Macklemore & Ryan Lewis performs live during a concert at the Mediolanum Forum on October 09, 2013...

Rapper Macklemore has won the support of officials at the Anti-Defamation League (Adl) after apologising for donning a controversial costume onstage which drew accusations of anti-Semitism.

The Thrift Shop hitmaker came under fire after performing in Seattle, Washington on Friday (16May14) wearing a large prosthetic nose, fake beard and a black wig.

The stunt prompted some angry critics to attack the star for allegedly poking fun at Jewish stereotypes, but he denied the claims on Twitter.com and then issued a lengthy explanation online on Tuesday (20May14), insisting he did not mean to cause any offence.

He stated, "There is no worse feeling than being misunderstood, especially when people are hurt or offended... I've always loved dressing up and have been doing so my entire career.

"The character I dressed up as on Friday had no intended cultural identity or background. I wasn't attempting to mimic any culture, nor resemble one. A 'Jewish stereotype' never crossed my mind..."

His apology has been accepted by bosses at the Adl and director Abe Foxman admits MACklemore has already proven that he does not stand for discrimination through his gay rights activism.

He says, "We welcome MACklemore's apology for wearing a costume that, regardless of his motives, reminded many people of an antisemitic caricature... We take him at his word that he did not have any ill intent and unreservedly accept his apology."

He adds, "We know that MACklemore is someone who has used his platform in the past to stand up and speak out against intolerance and bigotry, particularly homophobia. With that in mind we believe that this matter is little more than 'a tempest in a teapot' over an unfortunate choice of wardrobe."