Review of The Liberty of Norton Folgate Album by Madness

Review of Madness' album The Liberty of Norton Folgate. 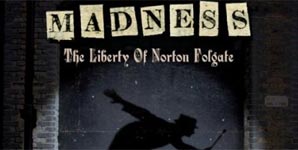 Maybe you have to be a diehard fan in order to appreciate this latest album and single combination from Madness, but sadly for yours truly I do not fall in to that segment of society. I expected that the single from the album 'Dust Devil' would at least be worth a listen, but unfortunately I found it to be nothing special.

It did not get much better from there for 'The Liberty of Norton Folgate'. The highlight of the album had to be 'Sugar and Spice' a genuinely enjoyable track, which is really sweet yet sad and in this instance the down to earth nature of the lyrics really worked. 'On the Town' also showed promise, but that was until the chorus kicked in, which I just found annoying. I couldn't get behind the pitch, the general tone and it was far too frequent throughout the song to let it slide.

'Idiot Child' again like 'Sugar and Spice' had a down to earth, working man's style. Unfortunately for me it didn't really pull it off this time, reminding me of Lily Allen's first album, but without the humour. 'NW5' had a nicely dramatic piano introduction which surfaced at random intervals throughout the song. However everything in between these theatrical elements was to me a little boring, generic and all too similar to others on the album.

Finally I arrived at the title track 'The Liberty of Norton Folgate', all 10 minutes and 12 seconds of it. The song played like a Fagin montage from the 1970s Oliver film, and other than the surreal circus music which I could only presume was the chorus, the track was all over the place. I like diversity in an album but this was a little much for one song. Perhaps they were going for a crazy style that would be up there with 'Bohemian Rhapsody' and 'I am the Walrus' but this really wasn't the case.

Overall 'The Liberty of Norton Folgate' proves to be easily forgetful and the songs a little samey. However I must stress that I am not, as I said earlier an uncompromising fan and for those that are, might find a little more light in the album. Like most of the population I love the old classics including 'One Step Beyond', 'Our House' and 'Baggy Trousers', but for me Madness have clearly had their day.