Madonna's daughter gets kiss from Beyonce

Madonna gushed with pride at Beyonce's 'Mrs. Carter Show' concert in Brooklyn, New York, last night (19.12.13) as the 'XO' singer took a moment to plant a sweet kiss on her daughter Mercy James. 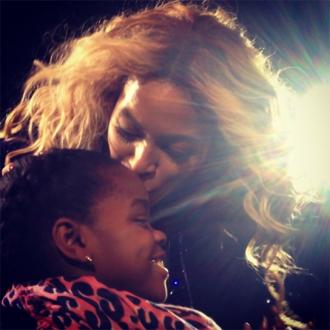 Madonna's daughter got a kiss from Beyonce at her concert last night (19.12.13).

The Queen of Pop was among the thousands of fans who enjoyed the latest stop on the 'XO' singer's 'Mrs. Carter Show' world tour at the Barclays Center in Brooklyn, New York, on Thursday and Beyonce even took a moment to acknowledge nine-year-old Mercy James, Madonna's adopted tot, and planted a big kiss on the forehead.

The 'Hung Up' singer documented the sweet moment on her Instagram account, captioning the picture: ''Mercy James gets a big fat one from the Queen. B! (sic)''

It appears pop royalty Madonna, 55, approves of her younger contemporary as she gave Beyonce, 32, a glowing review for her show-stopping concert.

Mercy isn't Madonna's only child to get a moment in the spotlight this week as Lourdes, the star's 17-year-old daughter with Carlos Leon, played Betty Rizzo in her school's production of 'Grease'.