Madonna Thanked Her Opening Act Amy Schumer For Putting On A Successful Comedy Set By Bringing Her Onstage For A Raunchy Routine During Her Show In New York On Wednesday Night (16sep15). 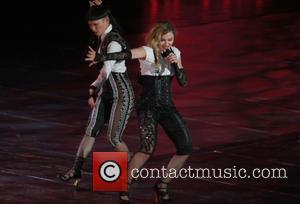 The pop veteran hired the comedienne to kick off her three Rebel Heart shows in the Big Apple, and Schumer won a slew of positive reviews for her opening stand-up performance at Madison Square Garden.

Madonna later brought Schumer back onstage to take part in a racy segment during a rendition of her track Unapologetic B**ch, and the singer pretended to spank her and kick her butt, while also simulating a sex act.

Schumer also showed off her dance skills by performing a 'twerking' routine.

She later shared pictures of her big night on her Twitter.com account, adding in a caption, "I am dead... Madonna", while the pop superstar also added a snap and wrote, "Love You Amy!... B**ch You are in my gang! Thank. You!!..."