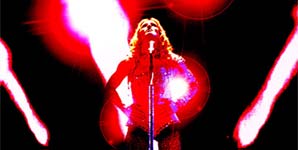 2006 was the year of Madonna. Her shimmering, smash-hit discotheque album 'Confessions On A Dance Floor' reached Number 1 in 29 countries and on May 21st she kick-started the greatest live show of her career - The Confessions World Tour - in L.A's Forum. Now, the triumphant show is released as a special-edition CD/DVD on January 29th. Containing 21 tracks, the DVD was filmed at London's Wembley Arena on Madonna's birthday, August 16th, during the last performance of her remarkable eight-night residency there.

Featuring the four hit singles from 'Confessions On A Dance Floor' - 'Hung Up', Sorry' Jump' and 'Get Together' - the stunning live CD also contains 9 other highlights from her illustrious career.