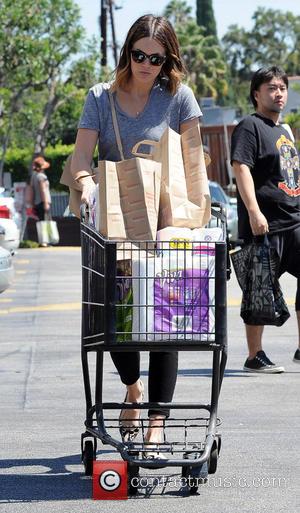 A representative for Moore and Adams announced the couple had "mutually decided" to end its almost six-year marriage last month (Jan15), and legal papers subsequently revealed Moore and Adams had actually separated in August (14).

Moore decided not to spend her first post-marriage Valentine's Day weekend alone and recruited her gal pal Kelly for a girls' trip to The Ranch at Live Oak Malibu in California.

The friends documented their activities, including hiking, with snaps on their Instagram.com pages.

In one of Moore's first posts, she donned breathing apparatus, hooked up to a variety of wires, for a comedy treadmill shot, captioned, "Super creepers, blurry photo but testing my fitness acumen to assess how I can properly push myself over the next few days."

On Saturday (14Feb15), Moore added another snap of Kelly resting her head on her friend's shoulder after a hike, and wrote, "We got separated from the rest of the group but we surrendered to a different path up and through these mountains and it was worth it. So lucky to share this time with you @minkak! You're a total bad-a** and inspiration."

Kelly has also been unlucky in love, splitting from Captain America star Chris Evans last year (14). The actress has also dated John Mayer and baseball hero Derek Jeter, among others.