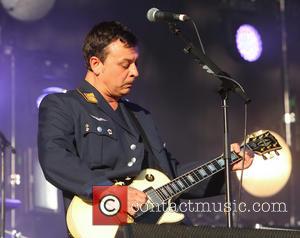 Manic Street Preachers axed their planned performance at Britain's V Festival on Saturday (16Aug14) after they were left stranded in Hungary.

The Welsh rockers were in the country for a gig at the Sziget Festival on Friday (15Aug14) and they were due to fly to the U.K. for their V slot in Chelmsford, England on Saturday.

However, the band was forced to cancel the performance after getting stuck on a plane for five hours at an airport in Budapest before the flight crew informed them the aircraft would not be taking off.

In a post on Twitter.com on Saturday, a representative for the group writes, "With huge regret, Manic Street Preachers announce the cancellation of their scheduled V Festival show in Chelmsford today (August 16th). After 5 hours on runway at Budapest Airport following Sziget Festival last night, Msp were informed the Ba plane they were on would not fly.

"The band made every endeavour to get back to the Uk in time to play. The band apologise to their fans at V Chelmsford for the cancellation."

However, there was good news for fans of the band at the event's twin festival in Staffordshire, England - the rockers later confirmed they had arrived back in the U.K. in time for their performance on Sunday (17Aug14),

In a tweet in the early hours of Sunday, the rep adds, "After 18hrs of travelling+waiting we arrive in birmingham hotel - worst travel day in 22yrs of the band - deepest apologies we tried everything. So sorry to cancel show at chelmsford - totally GUTTED-xxx."