The band used an impressive 2,056 words in their first three albums. 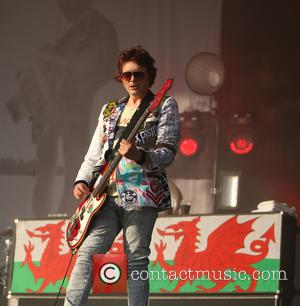 A tasty chunk of news for the music nerds: Manic Street Preachers have been found to be the most lyrically diverse act in a study of Welsh artists. Wales Online conducted the study to celebrate the release of the rock act's latest album, Futurology, and found that 2,056 unique words were used in only the Manics' first three albums.

The band emerged as top of the study, beating fellow Welsh superstars Stereophonics and Tom Jones. As the news site so appropriately points out, "For a band who sang "libraries gave us power," it's no shock that their use of language and words to get their message across."

For comparison, Cynon Valley group Stereophonics also scored highly with 1,453 different words used in their early back-catalogue, but Tom Jones' early work in the '60s saw just 867 words used over the his three first albums, with his third most-used word being "pussycat."

Jones and the Manics' favourite words - with 73 and 66 mentions respectively - is "love" showing that, crooner or alternative rock act, emotions are always going to be high on the list of themes.

More: Listen to Manic Street Preachers' 'Walk Me To The Bridge.'

The Manics' early nineties releases Generation Terrorists, Gold Against the Soul and The Holy Bible were the records included in the study but new LP Futurology, which was released a week ago, looks to be no less verbose with a wide range of themes and thought-provoking lyrical content.

More: The sun comes out for Manic Street Preachers at Portmeirion's Festival No.6.

Band members James Dean Bradfield, Nicky Wire and Sean Moore are renowned for their musically and lyrically diverse and often politically-charged songs so it's hardly a surprise that they have been identified as having an articulate range of words at their disposal.

The trio are also credited with having introduced the Japanese translation for tidal wave, "tsunami," into the English lingo in the '90s. The site also claims that Wales' musicians possess the most varied vocabularies compared with the rest of the UK, citing The Beatles' use of "love" 151 times in their first three albums. The Manic Street Preachers Have Been Named As The Most "Lyrically Diverse" Welsh Music Act.