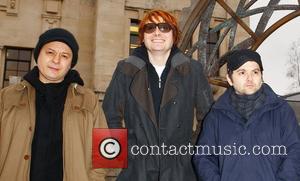 Welsh rockers the Manic Street Preachers are planning to replace frontman James Dean Bradfield with a new singer when they return from their two-year hiatus.
The A Design for Life hitmakers are celebrating their career by performing all 38 of their singles released since 1991 at a one-off concert in London at Christmas (11).
They have announced they will then take a break for "two or three years" - and now it has emerged founder member Bradfield might not even be part of the line-up when they return.
He tells Uncut magazine, "I want there to be a different singer in the band... we do need a new angle and we need a new voice in the band. That's where I am with it."
Bassist Nicky Wire adds, "I agree. Preferably one that looks slightly more attractive than you. Well, all of us really."