Manic Street Preachers have premiered their new single 'Rewind The Film', a collaboration with Richard Hawley and the title track of their new album. 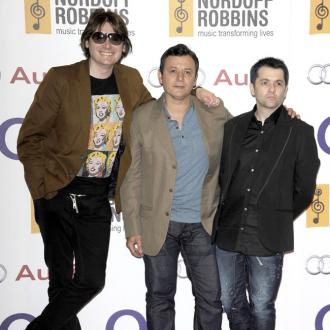 The 'A Design for Life' band have announced their 11th studio album, also called 'Rewind The Film', and previewed the first track from it, a six minute song featuring singer-songwriter Richard Hawley.

Recorded in their own studio, Faster, in Cardiff, the band - James Dean Bradfield, Sean Moore, Nicky Wire - liken their new album to the softer side of their back catalogue.

They said: ''If this record has a relation in the Manics back catalogue, it's probably the sedate coming of age that was 'This Is My Truth Tell Me Yours'.''

'Rewind The Film' also features contributions from guest stars including Lucy Rose, who sings on 'This Sullen Welsh Heart' and Cate Le Bon, who features on the previewed track '4 Lonely Roads'.

The band have previously said the album has an ''acoustic soul'' sound.

Bass player Nicky explained: ''We haven't covered anything up with noise, like loud guitars or string sections. As a band there's nothing to hide behind. It's frightening to think how we'll play it live.''

'Rewind The Film' will be released on September 16, preceded by a single, 'Show Me The Wonder'.