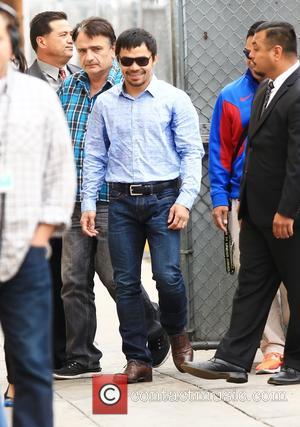 On Thursday (30Apr15), Knight pleaded not guilty to murder and other charges in connection to a fatal hit-and-run incident in Los Angeles in January (15), as Judge Ronald Coen set his bail at $10 million (£6.7 million).

Outside the courthouse, the former rap boss' lawyer, Matthew Fletcher, announced he's still attempting to get the case against his client dismissed, maintaining Knight was fleeing a life-threatening ambush when he hit and killed Terry Carter, and injured Cle 'Bone' Sloan with his vehicle in a Compton parking lot.

Fletcher, who asked Judge Coen to reduce the bail to $5 million (£3.3 million), has told The New York Daily News he expects Mayweather to post Knight's bail, stating, "We think Mr. Mayweather is going to win the championship and then come champion the day again... They're good friends... We believe it will happen."

However, a leading Mayweather source tells TMZ.com Suge's lawyer is ill informed and the boxer has no plans to pay the bail.

Fletcher tells the website he only made the comments because that's what he was told by his client's family.

Knight's trial will begin on 7 July (15), and Judge Coen has reserved 16 court days for the proceedings.

The rap mogul will be back in court on 16 May (15), when Fletcher will attempt to get the case dismissed.