Singer Marc Anthony Has Joined The Growing Number Of Celebrities Blasting U.s. Presidential Candidate Donald Trump Over His Remarks About Mexican Immigrants In America, Insisting Latinos Need To Stand Together. 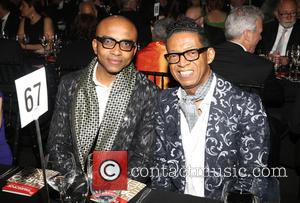 Trump's comments prompted a backlash from a slew of stars, with celebrities including Eva Longoria, Ricky Martin, Pitbull and George Lopez all speaking out to chastise the outspoken Republican.

Now Anthony has weighed in on the hot topic, insisting he is "sick and tired" of the offensive remarks.

Before performing one of his bilingual songs at a concert in Las Vegas on Tuesday (Sep15), he told the crowd, "I've got a good one. It's simple, bilingual, so for those who don't speak Spanish, you can sing it in English. Even that son of a b**ch Donald Trump will get it."

He continued, "We're Latinos, no matter where you come from. In my country they call me Puerto Rican. In your country they call you Mexican, Guatemalan. But here, in the United States, we are f**king Latinos. We are one! I'm sorry, I normally don't talk about this stuff but I'm just sick and tired."