Designer Marc Jacobs Has Taken His Naked Photograph Scandal In Good Humour By Mocking The Blunder With A New T-shirt. 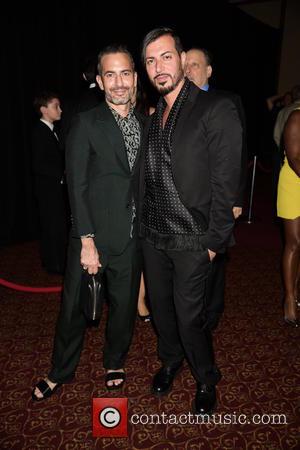 The U.S. fashion mogul hit headlines in July (15) when he accidentally posted a picture of his bare bottom and penis on Instagram.com when he thought he had sent it to a man via private message.

In the 'selfie', which Jacobs quickly deleted, the designer could be seen pulling down his underwear to expose himself and he added in the caption, "It's yours to try!"

Jacobs seemed unfazed by the mistake, writing, "I'm a gay man. I flirt and chat with guys online sometimes. BIG DEAL!" and he has now proven he sees the funny side by creating T-shirts emblazoned with his flirty caption, "It's yours to try!"

The designer showed off the garment on the website, adding, "Now available (THE T SHIRT!!!!) at a Marc Jacobs store near you."