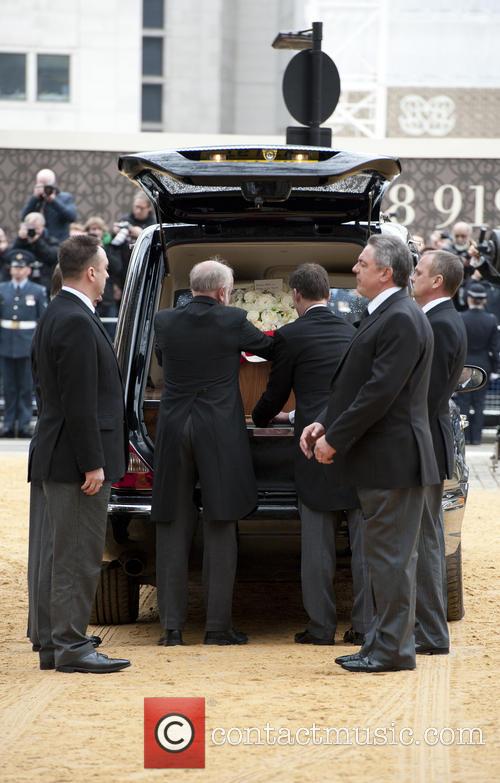 Atmopshere - A man dressed as the Devil during a fake funeral for Margaret Thatcher is held in the former mining village of Goldthorpe in Barnsley - South Yorkshire, United Kingdom - Wednesday 17th April 2013 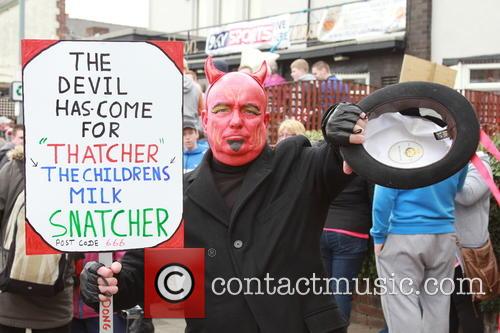 Guests - Born Margaret Hilda Roberts on 13th October, 1925, in Grantham, England, Thatcher became one of the most influential figures of the 20th century after entering politics in the 1950s. Nicknamed The Iron Lady for her tough conservative stance, Thatcher became Britain's first female prime minister after waging a successful general election campaign in 1979 and she went on to serve three consecutive terms in office. The veteran politician passed away on 8 April, 2013, after suffering a stroke following several years of declining health. - London, United Kingdom - Wednesday 17th April 2013 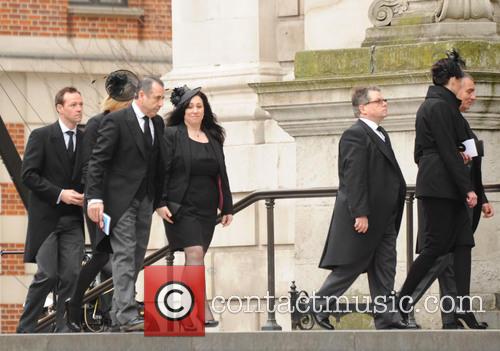 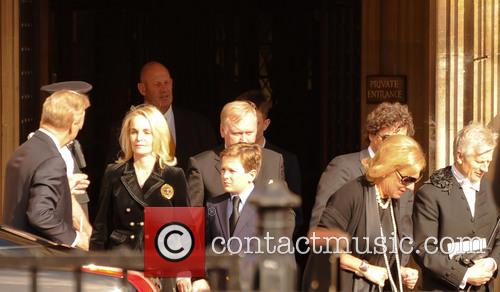 Audience overwhelmingly vote to keep the track in

Following the death of Margaret Thatcher yesterday from a stroke, one of the West End’s biggest plays faced the decision as to whether it would have to cut one of the most impactful moments of its script, with the show at the Victoria Palace Theatre in London possibly looking at cutting out a song in the musical that eagerly looks forward to the death of the former British prime minister.

Billy Elliott’s backdrop is the 1984 and 1985 miner’s strike between Thatcher’s government and the National Union of Mineworkers, one of the most pivotal moments of her 11 years in charge of the UK between 1979 and 1990. Given the death of the 87 year-old yesterday, Stephen Daltry, the director of the musical, said that there’d been much discussion about whether to drop the celebratory song.

Eventually, it was decided that the audience should be allowed to vote for whether the song would be allowed to remain in last night’s performance of the show or not. "After an explanation of the song's content and historical context from the stage, the audience voted overwhelmingly for its inclusion in the second act," he said. The song was composed by Sir Elton John with lyrics by Lee Hall, and is performed by miners during a party sequence, including the lyric: "We all celebrate today 'cause it's one day closer to your death."

The death of Margaret Thatcher might have been met with sadness at the top level of British politics, but reactions at a wider level were far more mixed, with as many of the general public seemingly taking pleasure from the death of the UK’s first prime minister to the extent that street parties were reported in the likes of Glasgow and Brixton – the latter where the infamous Poll Tax riots of the late 80’s occurred when Thatcher was in power.

It seems that this attitude has spread to the music charts as well, with a strong campaign having been launched on Facebook to get ‘Ding Dong The Witch Is Dead’ – from the 1939 film The Wizard of Oz – to number one in the UK singles charts. The Independent reports that within 24 hours of Thatcher’s death, the track had risen to number nine on the iTunes chart and number two on the Amazon UK downloads chart. Overall that meant it had already reached number 54 in the Official UK Singles Charts.

A Facebook group had originally been set up back in 2007 to begin the campaign for the day Thatcher eventually passed away. With the Baroness’ death it’s been re-energised and gained some serious momentum, in one of more than a few controversial reactions to the death of a prime minister whose own notoriety goes without saying.

By Jack de Aguilar in Lifestyle / Showbiz on 28 December 2012

A letter from Jimmy Savile to Margaret Thatcher - which is thought to be the beginning of a close relationship - has been released to the public for the first time.

Part of a Savile file has been released under the 30-year rule by the National Archives at Kew, the letter reads: "I waited a week before writing to thank you for my lunch invitation because I had such a superb time I didn't want to be too effusive. My girl patients pretended to be madly jealous and wanted to know what you wore and what you ate. All the paralysed lads called me "Sir James" all week. They all love you. Me too!!" according to a picture of the letter obtained by The Daily Mail. Disturbingly, some interchanges between the two have been censored or deleted eight days after claims that he had sexually abused people surfaced in an ITV documentary.

There is no record of a reply from Thatcher, apart from a memo to her from her personal secretary. In the message dated March 9, 1981, after the DJ had lunch with Mrs Thatcher at Chequers, Caroline Stephens wrote: 'Can you kindly let me know if you made any promises to Jimmy Savile when he lunched with you yesterday, for instance: '(i) Did you offer him any money for Stoke Mandeville? '(ii) Did you tell him that you would appear on Jim'll Fix It?' In felt pen, Mrs Thatcher replies to the first saying: 'Will tell you in detail. MT.' To the second, she simply writes: 'No.'