Review of Merry Christmas 2 you Album by Mariah Carey

Mariah Carey has done practically everything in her 20 year career and so it was only appropriate for her to release a Christmas LP this year. The result is a fun and nostalgic journey that would be everything you would expect; from a plentiful of bells to mere festive cheese. 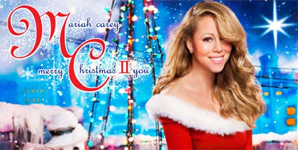 The collection kicks off with Oh Santa, a manic track that seems like a strange juxtaposition between Mariah's staple RnB sound and a Christmas offering. Whilst it shows attempts by Mariah to recreate another big Christmas song, like her hugely successful All I want for Christmas, which features on this LP, it fails in achieving anything grand or memorable. Furthermore, the scary falsetto appears that although highlights Carey's monumental vocals, can sometimes come across as grating. However, the album soon diverges into traditional mode with festive tracks such as O little Town of Bethlehem that builds to a stunning climax. The impressive thing here is that these tracks are a whole new take upon the originals with completely different key note changes and with medleys of various traditional songs blended into a conglomerate - the drummer boy echoes throughout the subcurrent of Bethlehem is a great addition.

Other Christmas classics are standout tracks. The First Noel is a beautiful and captivating single that is successful in being both understated and yet also epic. Whilst it starts off sounding like something you would hear in a hotel lobby; this really is the epitome of Christmas (apart from a weird urban interlude at the ending which should have not been present as it lowers the value of the track). Similarly O Come all ye Faithful really highlights what this album is all about - a family effort - as Patricia Carey, Carey's own operatically trained mother, gives this track an amazing attribute that builds it to a spectacular ending. On a side note, it is a shame that O Holy Night is a live offering because even though it adds diversity to the collection, the background audience can be a disruptance which prevents it from being a potential feature off the collection.

Furthermore, it is obvious that this album would be suitably perfect for a Christmas party. Here comes Santa Clause is quite quirky and different for a Christmas track but would be perfect for a festive do, whilst Charlie Brown Christmas, with its great piano introduction, is a wispy and sensual number that exemplifies what Mariah does perfectly. Therefore, the nature of this LP excuses filler tracks such as Christmas time is in the air again and When Christmas Comes as they simply would sound acceptable in the background of any office party across the world.

There is nothing that hints that you should expect too much from this album. Mariah's usually great hyperbolic vocals over traditional Christmas tracks are what this is all about. The fact that nearly every track has 'Santa' or 'Christmas' in their titles alludes to this perfectly. This is the definition of both camp and cheese, but at this time of year, we shouldn't really expect anything else. This is the essential item to get to put you in the festal mood. From Mariah and us, have a very Merry Christmas.