Mariah Carey is going to marry Nick Cannon for a third time this month and expects another diamond ring from her husband. 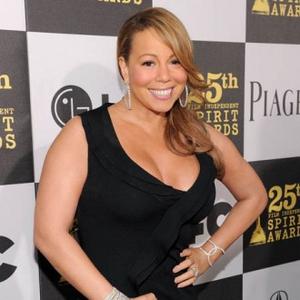 Mariah Carey is to marry Nick Cannon for a third time this month.

The couple - who originally tied the knot in 2008 - plan to renew their vows again on April 30, their two-year wedding anniversary, with the singer already demanding more expensive jewellery from her spouse to mark the occasion.

Nick said: "We get married every year! That's our thing. So it's going to be our third wedding this year. That's what we'll be doing on the actual anniversary... We'll do something... a party or event, just to celebrate. This is the third ring I have to buy. It'll be something different - something good."

According to leaked details of her 2010 tour rider, the 'Hero' singer is just as demanding backstage as she is with her husband.

The rider specifies that Mariah's dressing room space has "no busy patterns" although "black, dark grey, cream and dark Pink" are all fine, and she should also be provided with a "lamp or clip light", so harsh lighting can be turned off.

The 41-year-old star is also very particular about the temperature of the room, 75 degrees Fahrenheit, while she likes to be surrounded by two dozen white roses and vanilla aromatherapy candles in order to unwind after a show.

Mariah recently admitted she loves being known as a diva - but doesn't think she is demanding enough.

She said: "You know what? I guess I am a diva in many ways! When it comes to certain things, yes, I can be difficult and a little bit rigid about what I want. Am I demanding? I don't think I'm demanding enough."