What Does Mariah Carey's Husband Think of the ‘Death Threats’ Against His Wife? 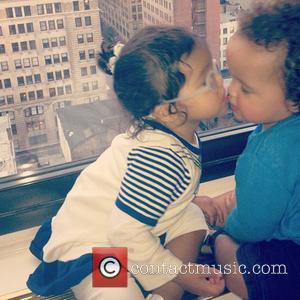 Picture: Mariah Carey posted this image of her twins on Instragram with the caption: "you love me & don't u forget it!" - A lil kiss...

Nick Cannon, Mariah Carey's husband of three years, in response to his wife's death threats from Nicki Minaj on American Idol, told E! that he wasn't 'worried about that stuff' and referred to the whole ordeal as 'drama'.

Carey clearly doesn't share her husband's blasé approach to her safety, reportedly having hired extra security after last week's confrontation between the two musicians. Minaj erupted in a tirade of abuse directed at Carey and stormed off stage, allegedly saying "If I had a gun I'd shoot the bitch".

Cannon's judgement of the drama and 'theatrics' seem right on the money, as an American Idol spokesperson said "This is one of the best, most passionate, dynamic and invested judging panels we've ever had... We love and support all of the judges and the fantastic work they are doing, and we can't imagine a better group to find the next American Idol." If a murderous duo constitute as 'one of the best' judging panels, one wonders what genuinely would make 'the best'.

Last week's tumultuous events didn't stop Cannon and Carey celebrating Cannon's 32nd birthday. Mariah (aged 42) kept fans updated on Twitter with a host of photos of their celebrations. Although their celebrations took place over the weekend, Cannon's birthday was actually on Monday, when Carey was flying out to China for a week. American Idol season 12 will begin airing early in 2013.