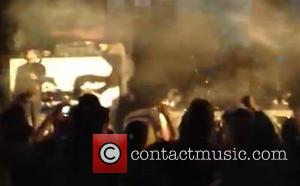 A seasoned rocker such as Marilyn Manson should have no qualms with loud noises or lots of screaming, so it can't have been that which has given him a funny turn. The mOBSCENE singer collapsed off stage while performing in Canada and was subsequently escorted off stage, doubled over, by a crew member, reports TMZ.

A video, posted online after the gig, shows him falling backwards during his rendition of 'Beautiful People' (scroll to 1:13) only to return to the stage, doubled over in either pain or sickness and helped off stage (see 2:32). His band didn't seem to notice at all for the almost 90 second time at which he was apparently incapacitated and just continued playing as normal.

He's currently dating an American photographer Lindsay Usich with whom, as he told the Observer, he's even considered having children with. "My girlfriend Lindsay's twin just had a baby and I've started to think that maybe I wouldn't mind passing my demented genius on to some small thing who can set fire and breathe profanity," he said. The public image of his lifestyle may not be the best idea for raising kids, but if this spat of illness is enough to get him to settle down, then there may be a mini-manson running around sometime soon.